Nomadism in Turkey, Why and How

What Is The Nomad Way – Turkey 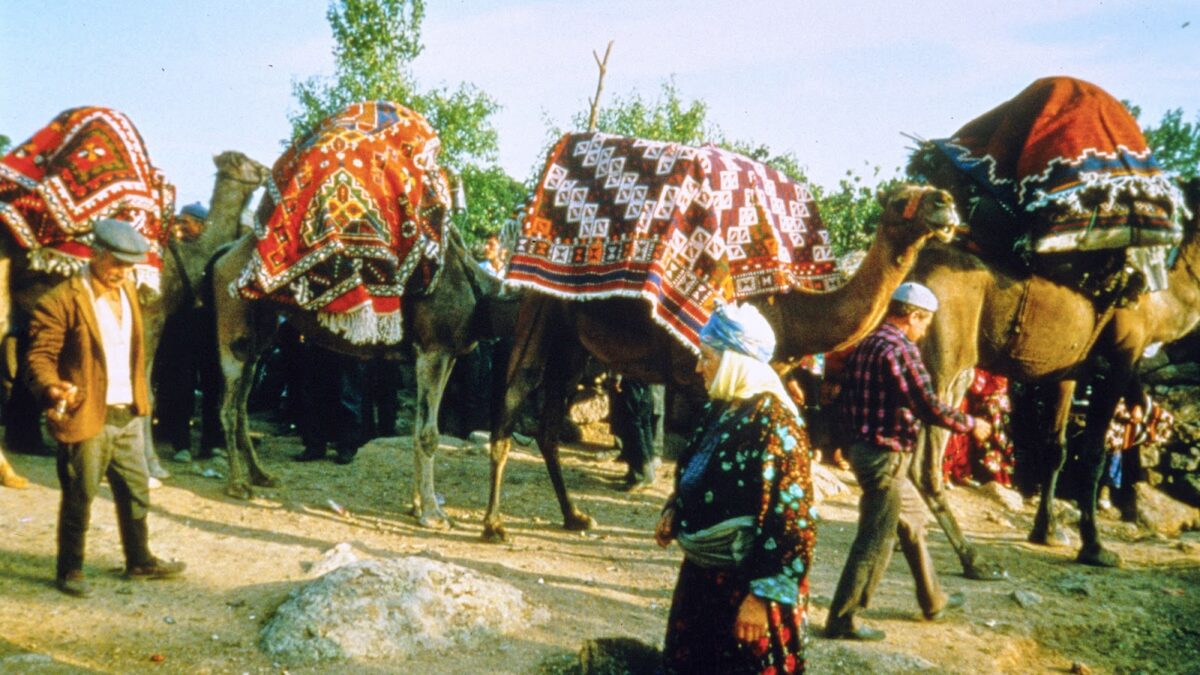 he transhumance activities had begun in Anatolia after the neolithic period, combined with the early bronze age. In many highland plateaus in Turkey, the petroglyphs depicting domestic goats and sheep as proof of this very old lifestyle applied in Turkey.

Low plains of the Aegean region raising from the sea with an altitude of 500 meters, reach the vast pastures of Eastern Anatolia above 2.500 meters within a distance of 1.500 kilometers.

Turkey’s position as the passage from Asia to Europe 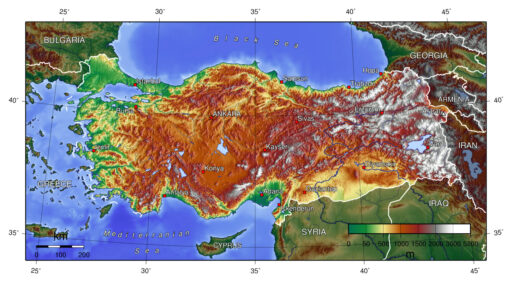 Interestingly, the situation is very different from going from the south to the north. The sea level reaches an altitude of 2000 meters within a distance of 100 kilometers. Turkey is a country surrounded by the Black Sea, Aegean and Mediterranean seas from its three sides. For this reason, the sea effect/steppe climate passage is very deeply felt during these 100 kilometers towards the mountainous parts of Anatolia. 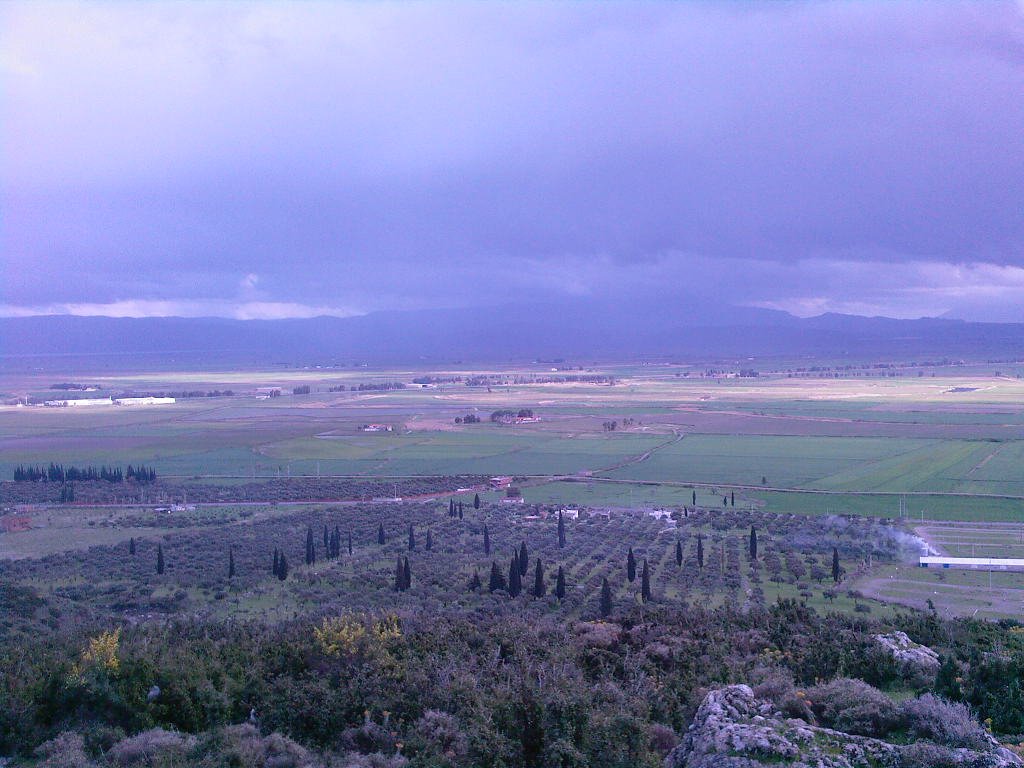 Anatolian nomads begin the preparations for the spring migration from the beginning of April. The worn-out parts of the tents are repaired, the saddles of horses, donkeys, and camels are checked, the bells of the leading sheep and goats of the herds are renovated. New clothes are prepared especially for young women at the age of the wedding. On the previous evening of the migration morning, the wraps from flatbread and cheese are prepared to be eaten during the migration. Neighboring clans or encampments of the same tribe decide which day the migration will begin. The main reason for this is the solidarity between the tribespeople because there are the young lambs and young goats which can cause some harm in the fields of the settled people. Moreover, there are generally streams and rivers flowing ferociously because of the melting snow.

The young of the tribe move from the camp taking the herds in the very early morning, around 3 o’clock. Towards 5 a.m., the wise elder women prepare the sacks loaded with the belongings of the families. The men load camels, donkeys mules, and horses with sacks, and the bedding on top of the sacks loaded symmetrically. Each loaded animal is covered by “perdeh”; a warp-faced weaving which serves to pack the load of the animal. 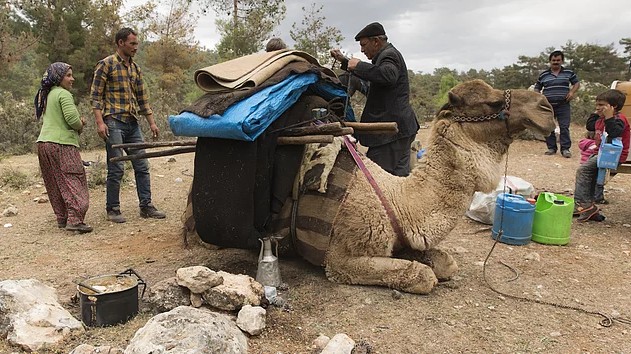 During the migration, the maximum distance crossed is around 25 or 30 km. The migration path and stopping/resting points are arranged by taking this distance into account. The stop points have rich water sources or wells to be used by humans and animals. From time to time the tribe takes 2 or 3 days to have a rest, this is also related to the conditions of the water sources and of the graze too. In the stop points, the families have distinct tent places belonging to them and inherited from their families, so there will be no chaos on the usage of water sources and grazing lands around the stop points.

During the migration path, a lot of settlements like towns and villages inhabited by settled people are crossed. That means also that the migration itself is a way to show the prosperity, the wealth, and the artistic talents of the tribeswomen by exposing their wand woven crafts. The tribespeople wears their best clothes and has vanity and pride while crossing the towns and villages to gain the respect of settled people but at the same time to find potential spouses for the young members of the tribe. The migration can take a period between one week or two months in Turkey, according to the distance crossed by the members of the tribes. 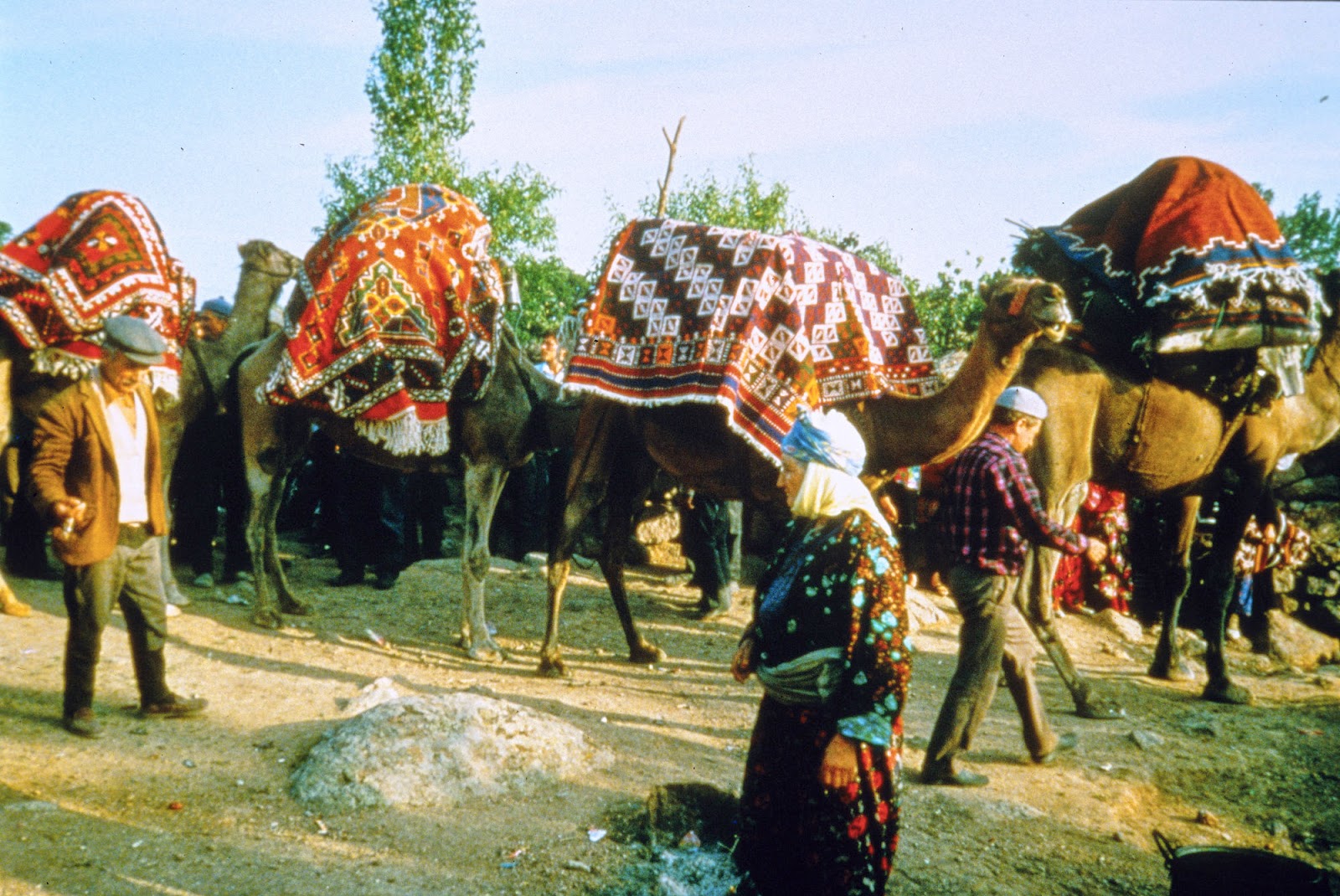 In the summer camps located more or less in 2000 meters of altitude, the daytime is sunny but generally, there is a cooling breeze that provides the sheep and goats feed themselves in the graze, which would not be possible under a certain altitude because of the heat and humidity. the cool climate is also an opportunity for the tribespeople to refresh themselves, and pass a healthy summer period. The products obtained in the pastures are mostly milk-based products such as cheese, yogurt, butter, cream, and wool. The animals are shorn after arriving to the summer pastures as a festive activity in which all the members of the tribe participate. 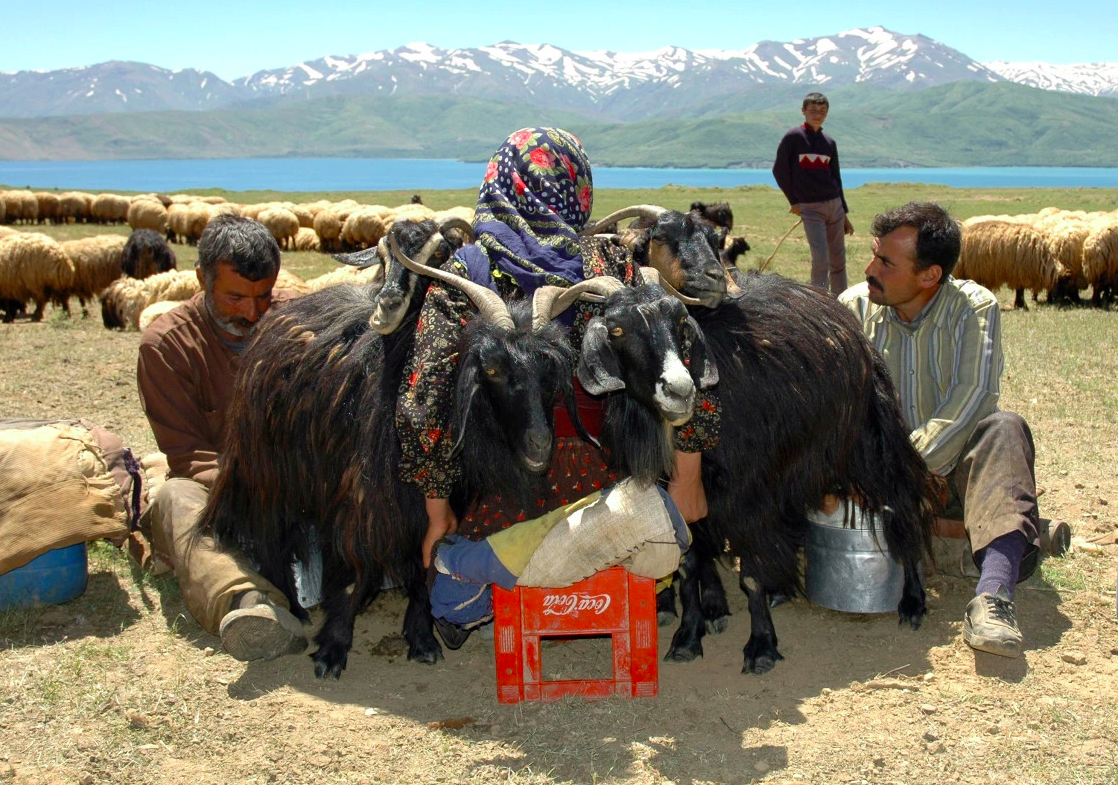 Towards the end of September, the weather becomes cold, and the tribes of Turkey moves towards the southern and lower lands to pass their winter in remote and calm areas. The autumn migration takes longer and the members of the tribe take advantage of the time to sell the excess of the products that they produced during the summer, in the nearby towns. Those products can be alive animals, cheese, butter, and wool. 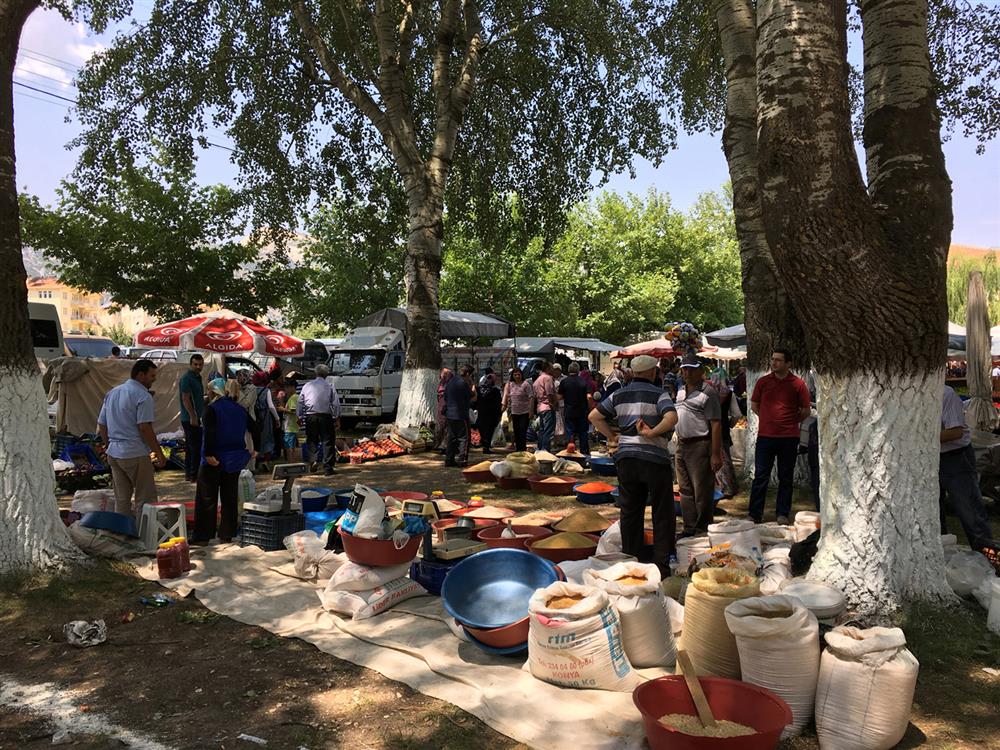 Before mid-November, all of the tribes of Turkey arrive at their winter camping areas which are in a lower altitude and southern areas compared to the location of the summer camps. Generally, an area in which there will be no snowing weather is chosen for the winter camps. The milking period passed the tribe members have a calmer workload and the animals are feed onto the grazing land always green by the effect of autumn and winter rains. The women produce their handwoven tent fabrics, rugs, or bags according to the needs of the family. All of the tribe will wait now for the arrival of the new spring season to migrate prosperously and enjoy the summer camps on top of the high mountains 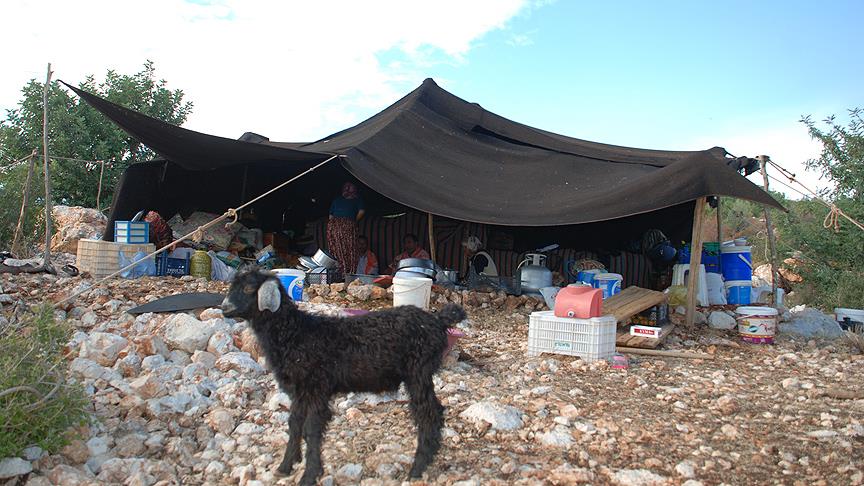