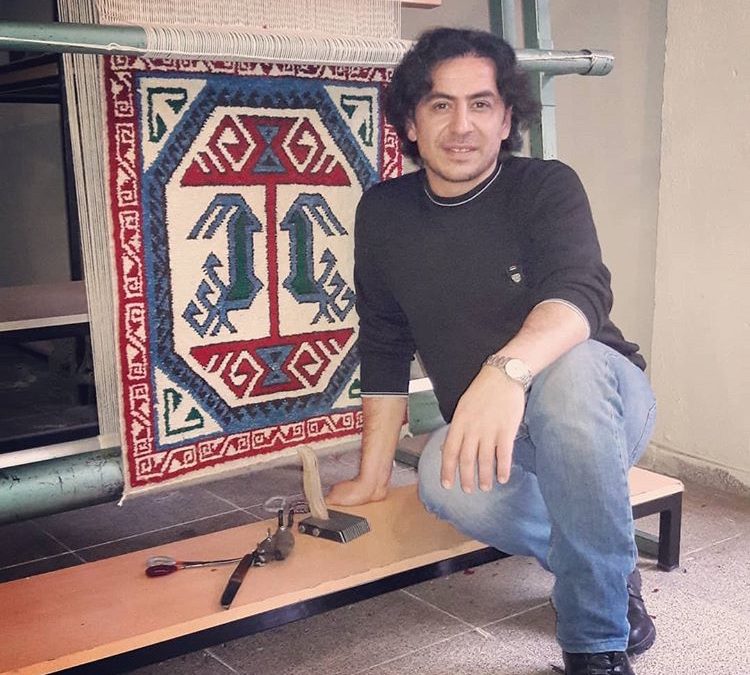 Ismail is a teacher of Turkish Literature in one the most prestigious high schools of Kayseri, one of the cities mostly known by its fine carpets. Ismail has born as the last child of a crowded family with two brothers and two sisters in the town named Bünyan, a small town in the middle of Anatolian plateau, very famous with its fine carpets. Raised in a deep Turkmen cultural environment, İsmail childhood passed in the cuddle of her mother who was always weaving carpets on order to help the family economy in a significant way.

At 10 years old Ismail was already able to prepare the loom, make the heddle and weave pile carpets as professional as the women around, who make this business for many years as professional workers of some commissioners who generally come from Istanbul. Becoming a professional of rug weaving, Ismail loved the job that he was doing during his childhood and adolescence in a very talented way, but there was a problem: the carpet job was considered by this closed society as a “woman work” and the men were not allowed even to be interested in this subject; otherwise they were severely criticized if not ever mocked. But on the other hand Ismail couldn’t stop himself to make research and learn the carpet business more deeply through village visits, interviews with carpet weaving women and salesmen on carpet and kilim weaving technique on wool dying and many other subjects about hand-woven rugs. 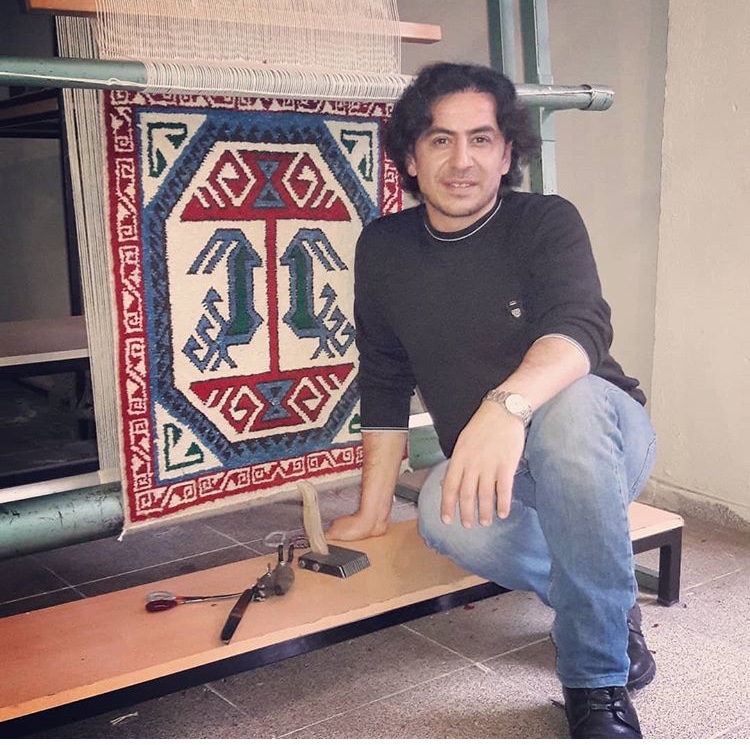 These researches brought Ismail in a point that he realized that all this stories around the carpet business were directly coming from the nomadic roots of the society he lives in and this trait encouraged him to go deeper in the local history of the society that he was living in and he ended up with being a Turkish Language Literature teacher while he was graduating from university. Then, by this way, he would be much more appreciated and respected as every other teacher in the area who enlightens the minds of young people in such a society where formal education was a luxury since recent years.

One day when he was going around some carpet shops in Kayseri covered market; he saw a narrow and long thing woven like a belt with very elaborate patterns onto. The thing was not seeming to a carpet and neither to a craft created by kilim weaving technique so he was more and more curious. He asked the shop keeper what was it and had the answer that, that was a “çarpana” a tablet weaving trapping band. The shopkeeper said it was a completely forgotten technique that was a lot applied in villages and between nomads to pack the animals to be loaded or to be used as belts for ladies. He bought the piece for such a little money and went back home. Intrigued with the techniques, he showed the piece to her grandmother who was still alive at that time and heard “oh I was weaving them a lot when I was single yet in the village for my dowry!” he wasn’t expecting hearing that. He detached some centimeters from the band but couldn’t figure out how they wove such a thing. Apparently, that technique was very different with rug weaving. Then he addressed his grandmother to teach him how to weave a similar thing. 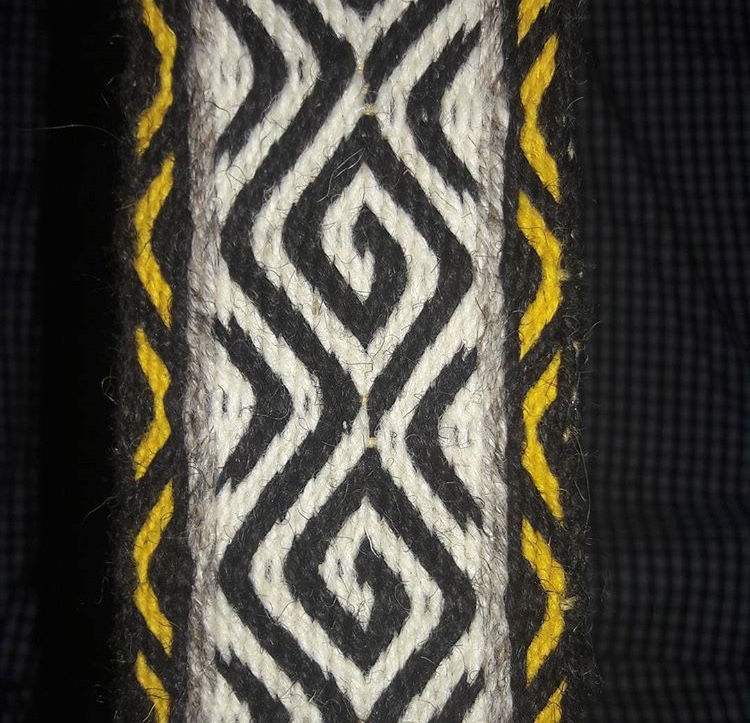 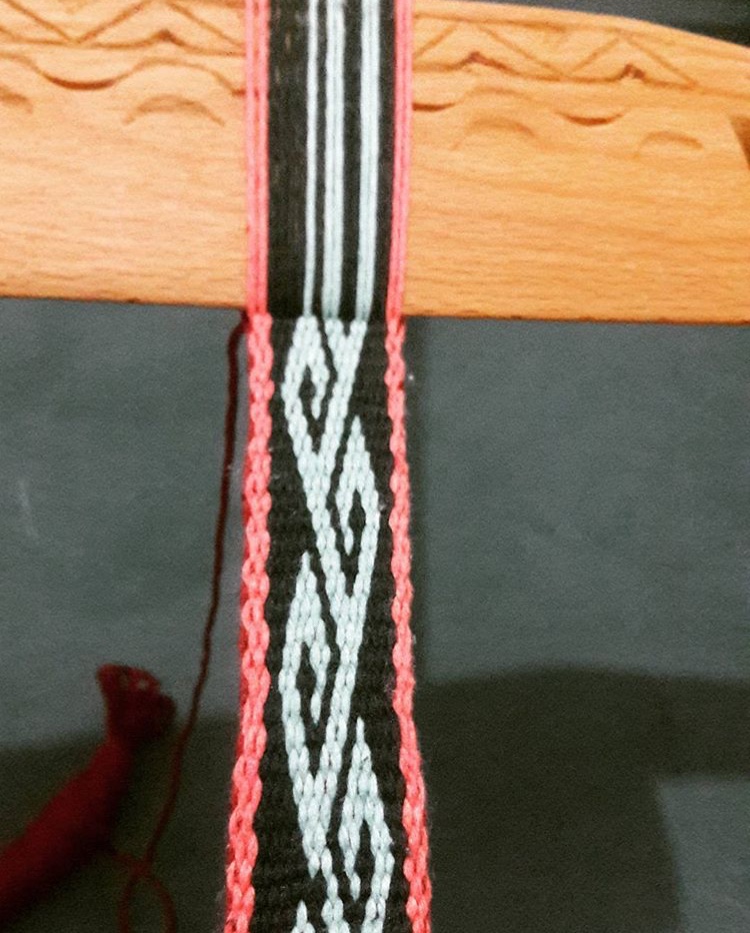 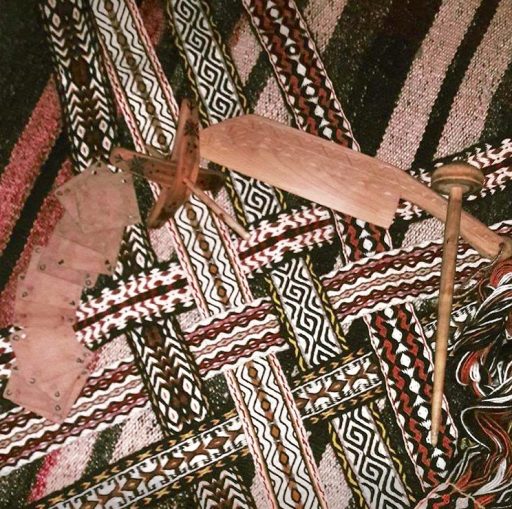 His grandmother first described what the tools were like in order to weave.  “A sword!” grandma said, something alike a wide blade. “Wooden squares, many!”, so Ismail prepared the sword and a bunch of 30 square wooden layers of 5 centimeters by 5 centimeters with 2 milimeters thickness, four corners pierced exactly like Grandma described. And Granma began to make her miracle…. Ismail was fascinated. Grandma has been seeing Ismail this much motivated with the weaving, stopped and said “this is enough for now!”, but İsmail had already captured the technique in his mind. He tried by himself, developed many patterns and his ability, and wove many of them without knowing what to do with.

I had met him in a WhatsApp group about hand weavings. He was different from others with his deep knowledge about the authenticity of Anatolian weavings and also with the love against the nature and nomadic life. We had been close friends for couple of years, closer and closer in each phone call even though we live in different cities.

I have proposed him to weave some trapping bands for my nomadic sacks to be hanged on horses; he was in the middle of his family’s wheat field in the season of harvesting. Although extremely busy, he accepted my proposal and wove 20 trapping bands for me. Despite the critics of his elder brothers who didn’t understand for whom he was weaving all these bands during the whole night (!). I begged him to take money for this job that he did despite the pressure coming from the family elders and the amount of the daily work he has been into, he never accepted. This is the first time he and his handcrafts were appreciated by somebody else who gave importance to his work.

Then, by this motivation, he decided to apply for a master degree in a distant city where he was living in, and he gained the first prize on exams of entering to the section of traditional weavings master degree. Never been encouraged by any person from his close entourage, he wasn’t expecting a prize while entering to this exam. But something unique and wonderful happened then. Each single member of his close and extended family went next to him to celebrate his success in the academic environment about weaving, his greater brother even hugged him very strongly and said, “Oh boy, you made us such proud of ourselves being your family, may god increase your success!”, her mother and her wife were already in tears.