Different Types of Textiles in Turkey

What Is The Nomad Way – Turkey 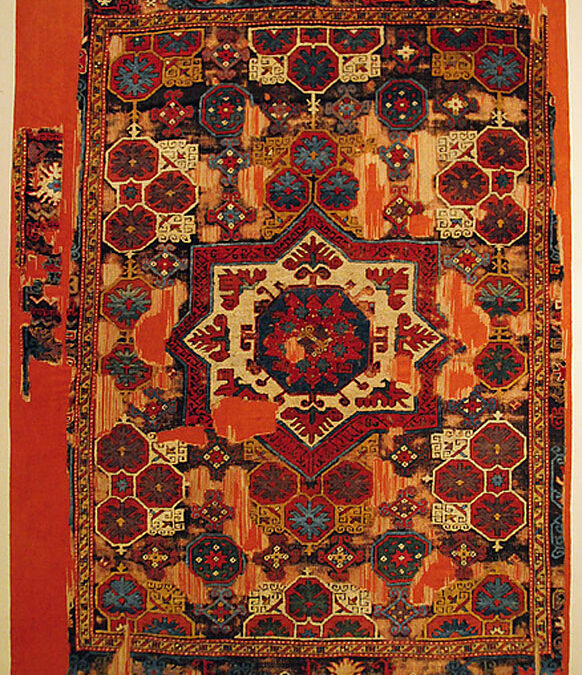 Turkish textiles have always been in the very center of Turkish daily life, during the whole history, beginning from the arrival of Turks, in the early 11th century in the Anatolian Peninsula.

There was already a very important textile culture in Anatolia remaining from the existed civilizations. Anatolian textiles had gained a reputation in the Mediterranean basin and the middle east since the iron age.

Phrygian woolen fabrics and fleeces with their extreme quality were important products of exportation to the Aegean islands and the Hellenic Peninsula. Hittite flat-woven rugs were appreciated and traded very much, as well as Assur ones imported from far southern lands. In later periods of history, Byzantine textiles, with extremely valuable material such as silk coming from Persia and Imperial Purple dye coming from Tyr city was a privilege to wear or to have as a possession. Embroideries combined with semi-valuable or valuable beads such as amber, pearl, coral, or agate were classical for the Byzantine court. 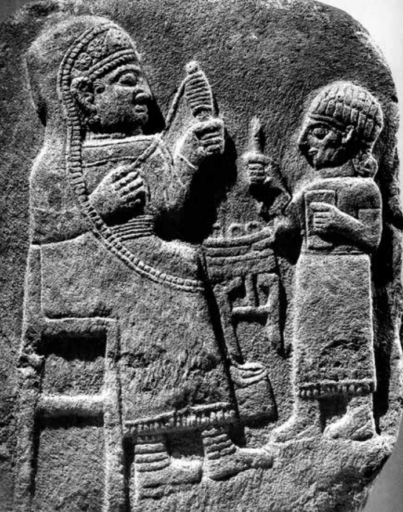 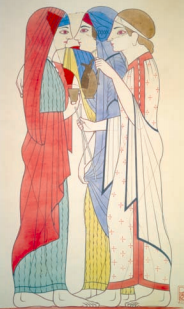 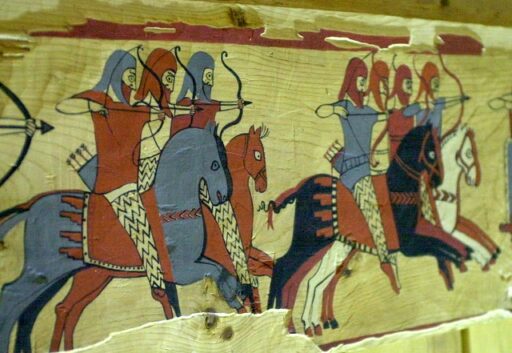 Reproduction of the fresco depicting the Lydian soldiers in their costumes. Iron age, Western Turkey

Drawings on an Urartian Belt, having a woman figure in the right, holding a textile piece, Iron age, Eastern Turkey

Sassanian and Scythian textiles coming from eastern lands, were also elements of prestige, with extremely elaborate workmanship and fine texture, generally having stylized animal patterns while Coptic textiles coming from Alexandria of Egypt, were in the form of flat-woven rugs and embroideries, with scenes from the daily life. 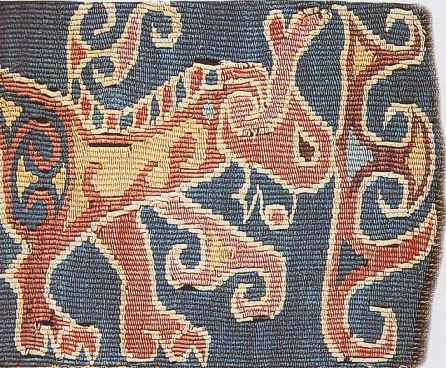 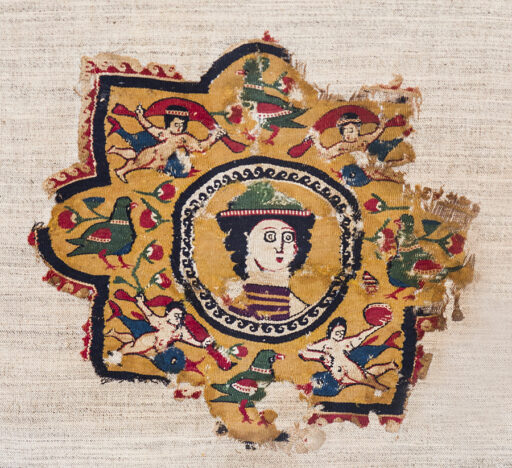 There was also a very strong textile culture belonging to Armenian and Assyrian communities generally based on fine-spun wool fabrics elaborately woven for clothing purposes. 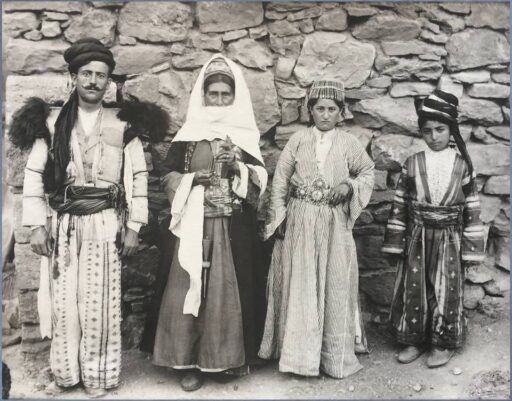 An Armenian family from Çatak, Van area, with the clothing they wove and tailored for their own use. the beginning of 20th century, Eastern Turkey

Turks brought the textiles and methods having the traits of Central Asia with themselves. After the conquest of the Anatolian Peninsula in 150 years, Turks combined the existing textile culture and workforce with their crafts and created a strong and sustainable textile environment that has been the resource for the inner use and the needs of the neighboring geographies, until the intervention of the industrial revolution. 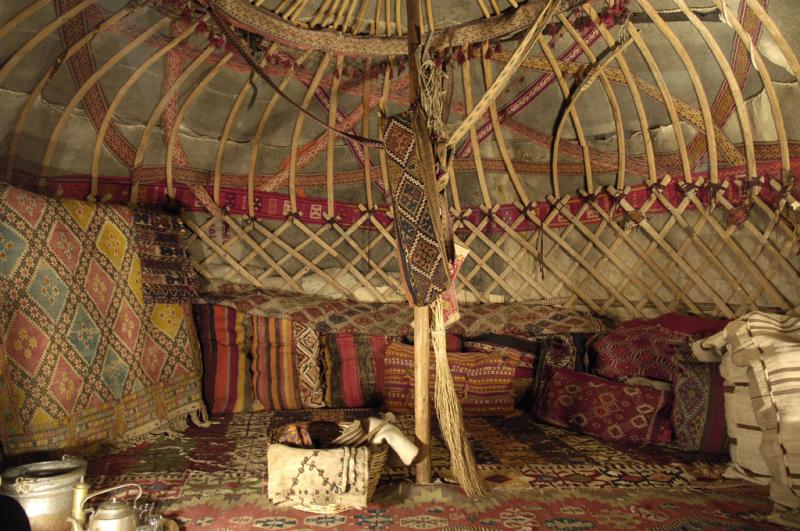 The interior of an Anatolian Turkmen tent decorated with handwoven rugs, Turkish and Islamic Arts Museum/Istanbul

The felt is maybe the most basic textile made without a structure of warp and weft but with the unification of the fibers by the help of humidity, pressure, and friction. Very cheap as material, it has a free pattern area to perform very basic and primitive or very elaborate and elegant designs made with colored wool pieces of embroideries with yarns of other materials such as cotton or silk.

*Kilim is weft based weaving practiced in Anatolia for several millenniums. The basis of kilim consists of weft layers accumulated on stretched warps which are unseen. Types of kilims vary a lot according to the positioning of the different colored wefts aside from each other. The wefts can be wrapped on the same warp, or interlocked to each other, or can form small slits, without touching each other. Wool yarn is generally preferred due to its strength and durability. 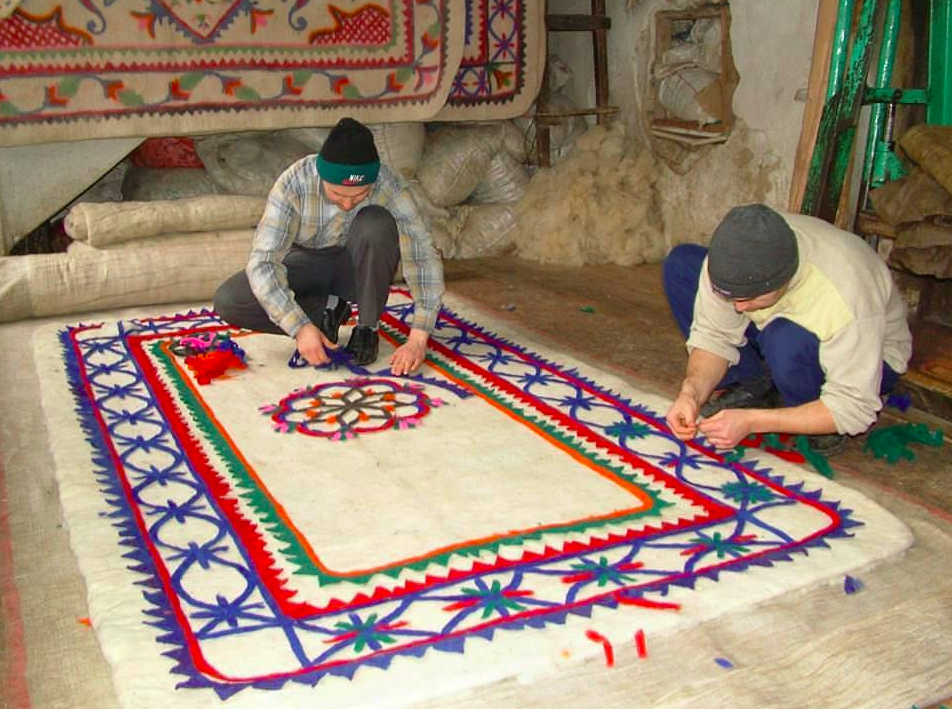 Felt rug at the stage of processing. Konya, Central Turkey

Warp faced weavings are generally produced to be used in tough and rough usage conditions. Stretched warps form a strong and rough surface, sticking side to side with the help of the weft, pulled during the weaving, and become unseen between lots of warps. Jajims having alternative colored warps to form patterns are used as ground cover. Tent fabrics also made from goat hair are produced typically as warp-faced for the durable performance they have. Narrow bands with the length of several meters, woven either with heddle or tablet weaving method, are used as pack animal band, saddle band, or tent fixing band. 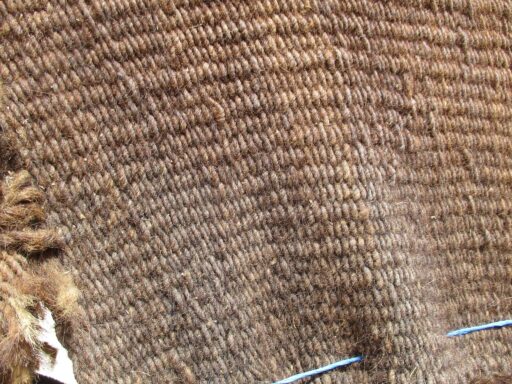 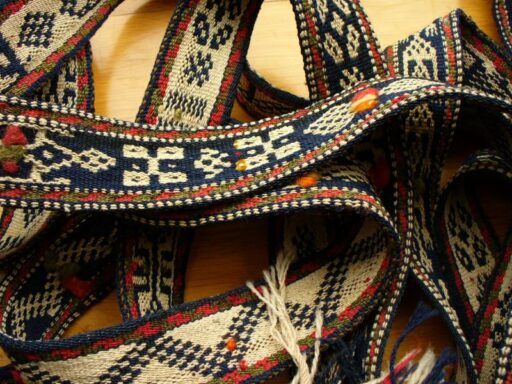 Pile carpets consist of one line of pile knot, attached on two warps and one life of kilim/tapestry, linking vertical knot lots to each other to form a surface. Always requiring a high amount of workmanship, pile carpets were always luxurious products regardless of the economical level of their producers. Pile carpets were one of the most expensive exportation products of the Ottoman Empire. Having different technical, design, and color styles Anatolian carpets have formed different classical schools within themselves that survived until nowadays. 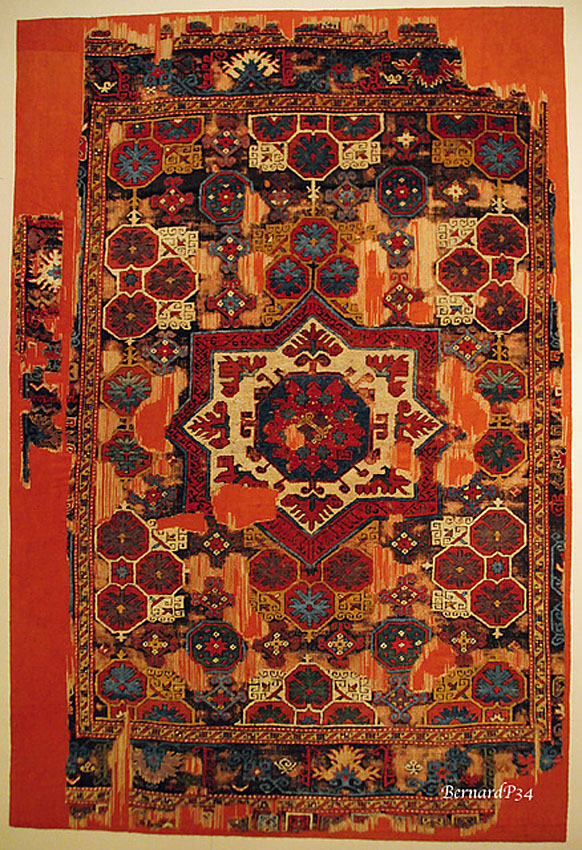 Zili is a flat-weaved rug with extra brocade yarns passing over a multitude of warps then under the following warp to form a horizontal pattern part. This passage of the colored yarn under the following warps makes a cord effect on the surface of the rug going along the length of it. After passing the colored yarns over the warps to form the pattern, a weft line is passed in each row, which is unseen between colored yarns of each line. Zili is a coarse weaving applied by Nomads of Turkey to make ground coverage rugs, nomad sacks, and pillows. 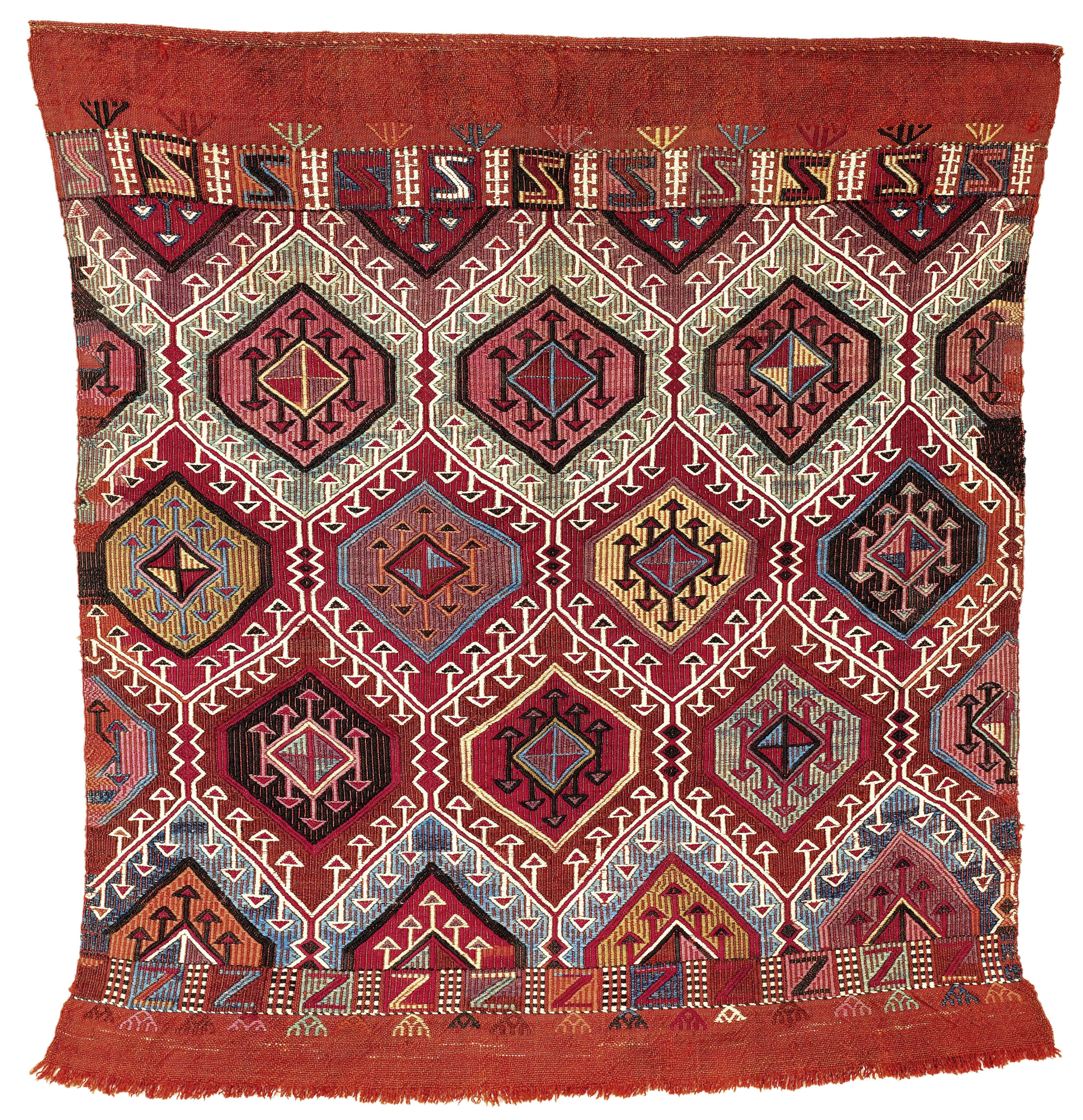 Confused generally with jajim which is warp-faced, jijim are also flat-weaved rugs with extra brocade yarns. In each line, the colored yarns are wrapped over a multitude of warps to form the pattern. This weaving is very much used to make fine covers to put over the bedding pile, in the Nomad tents, and village houses. Also, small bags such as vanity bags, koran covers, tucker bags, roller pin covers, and shear covers are made from this weaving type. 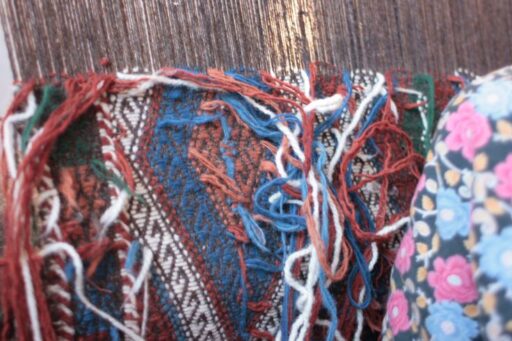 Weaving jijim from the back side on the loom, Çanakkale, Turkey 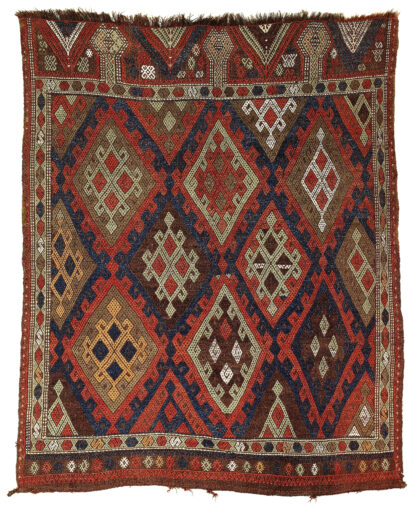 Soumak also consists of warps and wefts but in each line, colored patter yarns are wrapped over each warp or pair of warps. The weave I fine but durable, This technique is very much used by Nomads of Turkey to make clothing and storage bags as well as salt bags, koran covers, roller pin covers, and shear covers as well.

Very much used in towns, cotton fabrics are used to produce outfit as well as lingerie. Generally preferred to be used without any dye, cotton fabrics were also dyed with specific colors according to their functionality and also the wealth of its owner. The most difficult and prestigious color on cotton fabric was Turkey red, a very bright fire or blood red made with madder root. Another prestigious color was the canary yellow which was difficult to sustain against the wash and light effect. These fabrics could be extremely fine such as a tulle veil or extremely coarse such as a big curtain. These cotton fabrics can be embroidered and made for many kinds of clothing but the towel named “peşkir” is the most famous one of these kinds of embroidered fabrics. 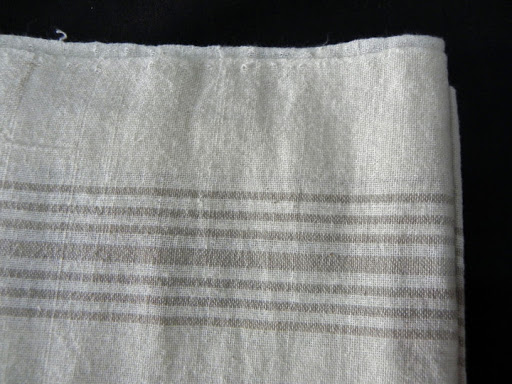 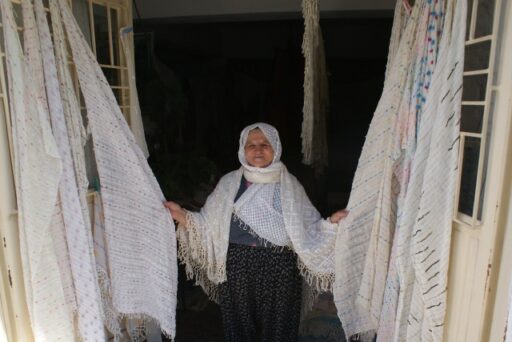 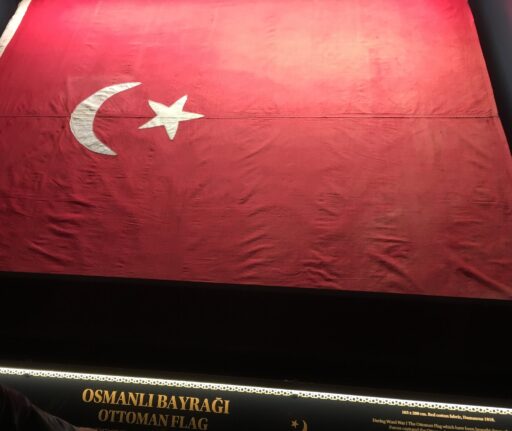 Shayak: Shayak is a woolen fabric similar to Scottish hodden with approximately 12-15 string in a cm as warps, and 12 string as weft. The fabric is felted by pouring hot water and pressing and rubbing it over itself. The fabric becoming felt like cloth is extremely durable and insulating properties. Shayak is very much used to make trousers and jackets for people who work outside under heavy weather conditions such as shepherds. 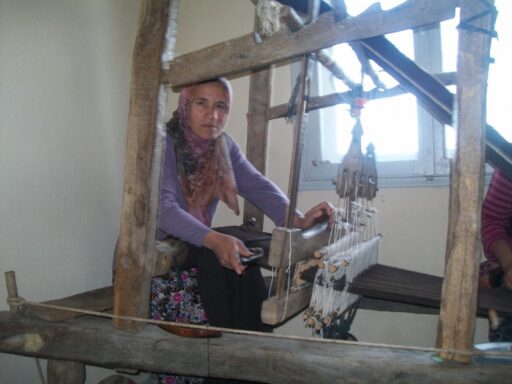 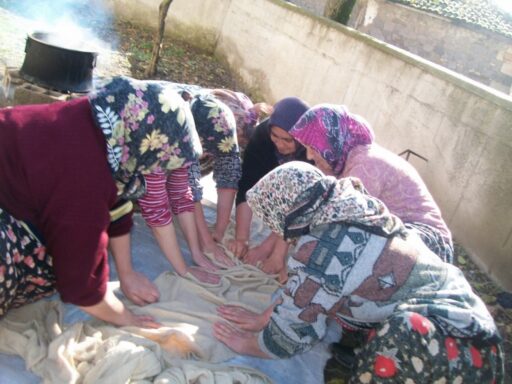 Şayak fabric being felted by the help of friction and hot water. Balıkesir, Western Turkey, 2016

Sof is a very special and luxurious fabric made from Angora goat hair. The Angora hair is very finely combed, spun, and woven. The fabric obtained was used to make fine clothing for outwear especially in towns and cities by wealthy people. Sof was mostly produced in Ankara city. 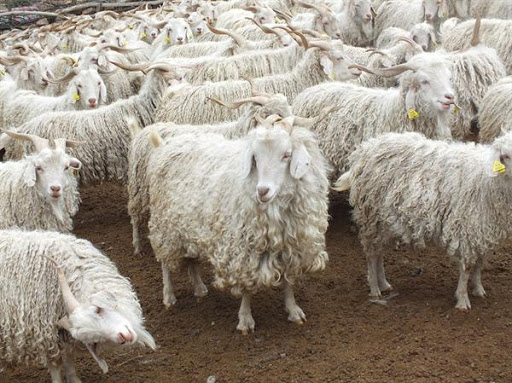 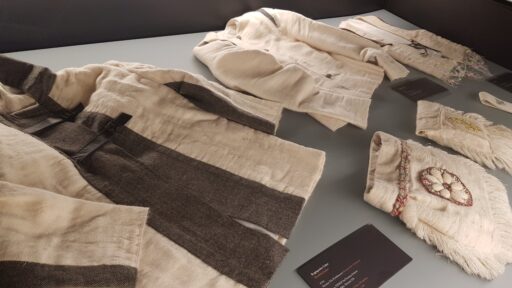 Çatma is a kind of silk velvet fabric with a double ground generally having metal thread and raised design. In the 16th century, the fame of Bursa çatmas spread far beyond the confines of the Ottoman Empire, Although a very costly fabric, it was in great demand in foreign markets and was one of Bursa’s most important exports. It was also very popular on the domestic market and occupied an important place among the gifts presented to foreign heads of state by envoys and ambassadors. We know that in 16th-century producers coming from Venice had made some trade alliances and some pattern cartoons were exchanged between Çatma producers of Bursa and Velvet producers of Venice.

Kemha fabric known to westerners as “brocade”, was also very popular abroad. It was a silk fabric with a double ground very often with an admixture of metal wire thread. In the 16th century, orders were placed for this type of fabric for use in papal robes and the ceremonial apparel worn by the imperial entourage. Papal costumes made from Ottoman brocades are found in museums and church treasuries. There were large numbers of kemha and çatma weaving workshops in both Istanbul and Bursa, and a plan of a workshop specializing in the production of these particular fabrics is found in the palace archives. 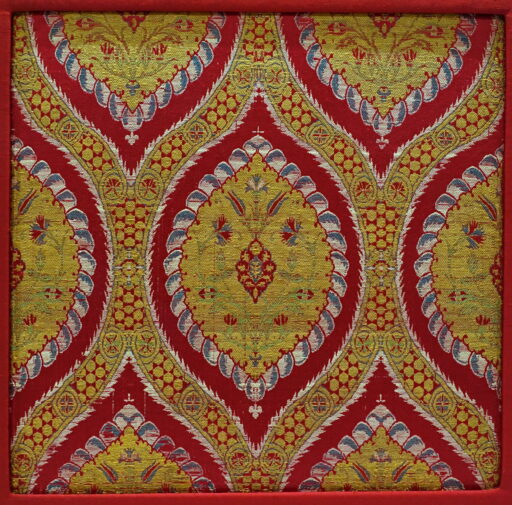 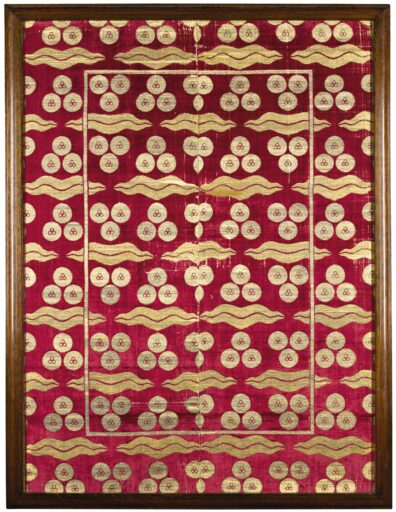 Block printing and hand drawing are very old patterning methods for textiles in Turkey. Relatively cheap, the textiles ornamented with block print and hand drawing were used by masses of society all over Anatolia during centuries to respond to the aesthetic needs of the society where the economic level of them was not enough to wear Çatma or Kemha. Block printing has been practiced all over Anatolia but the high-quality ones were coming from Istanbul, Bursa, and Tokat. For the hand-drawn textiles, the distinctive quality textiles were coming from Istanbul as well, especially from Kandilli district, and Bursa. Those two methods were especially used for the veils that Turkish women were wearing on their heads during their daily life. 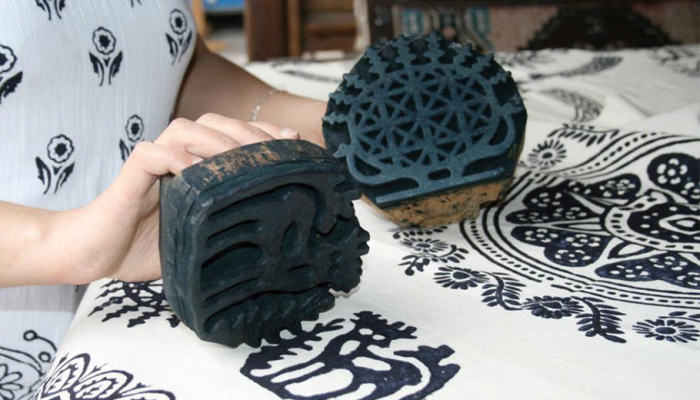