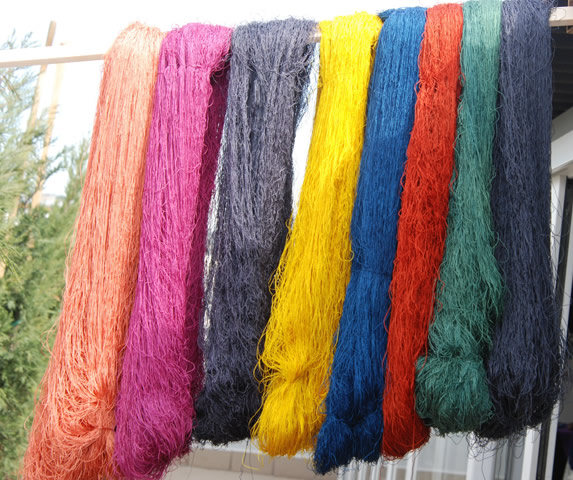 Turkish textiles have been appreciated and loved all over the world for their visual beauty with different patterns, techniques, and quality. The visual art applied during the production of those artifacts has been mastered during centuries or even millenniums and has put at the stage the best visual joys that are always admired by people.

One of the most important properties of Turkish textiles is their colors obtained from plants and insects in the hands of Anatolian dye masters. Each color has its own story and history in the Anatolian land and has its specifications.

Maybe the most well-known color in Turkish textiles is red. Turks and Kurds the two major ethnicities living in the Anatolian peninsula have a special addiction to this color. The red color in Anatolian Carpets and kilims is generally obtained from the Madder Root. Growing especially in the steppe climate of Central Anatolia and semi steppe climate of the Aegean region, the plant itself was also cultivated and sold as a dye and Ottomans have gained big amounts of money from these exportation activities. The madder root is used in Anatolia for some millenniums. The rich and saturated blood red is the triumph of this plant and was obtained in a period between the 15th and 18th centuries and specially used in the carpets coming from Western and Central Anatolia which were very important export products by themselves. On the other hand, Turkey red is a very famous color with a dark scarlet hue applied only on cotton textiles. The methods are based on a very complex and long process based on successive sheep dung and acorn baths before the mordantation and then dyeing with the madder root brings that fire red to the fabric. 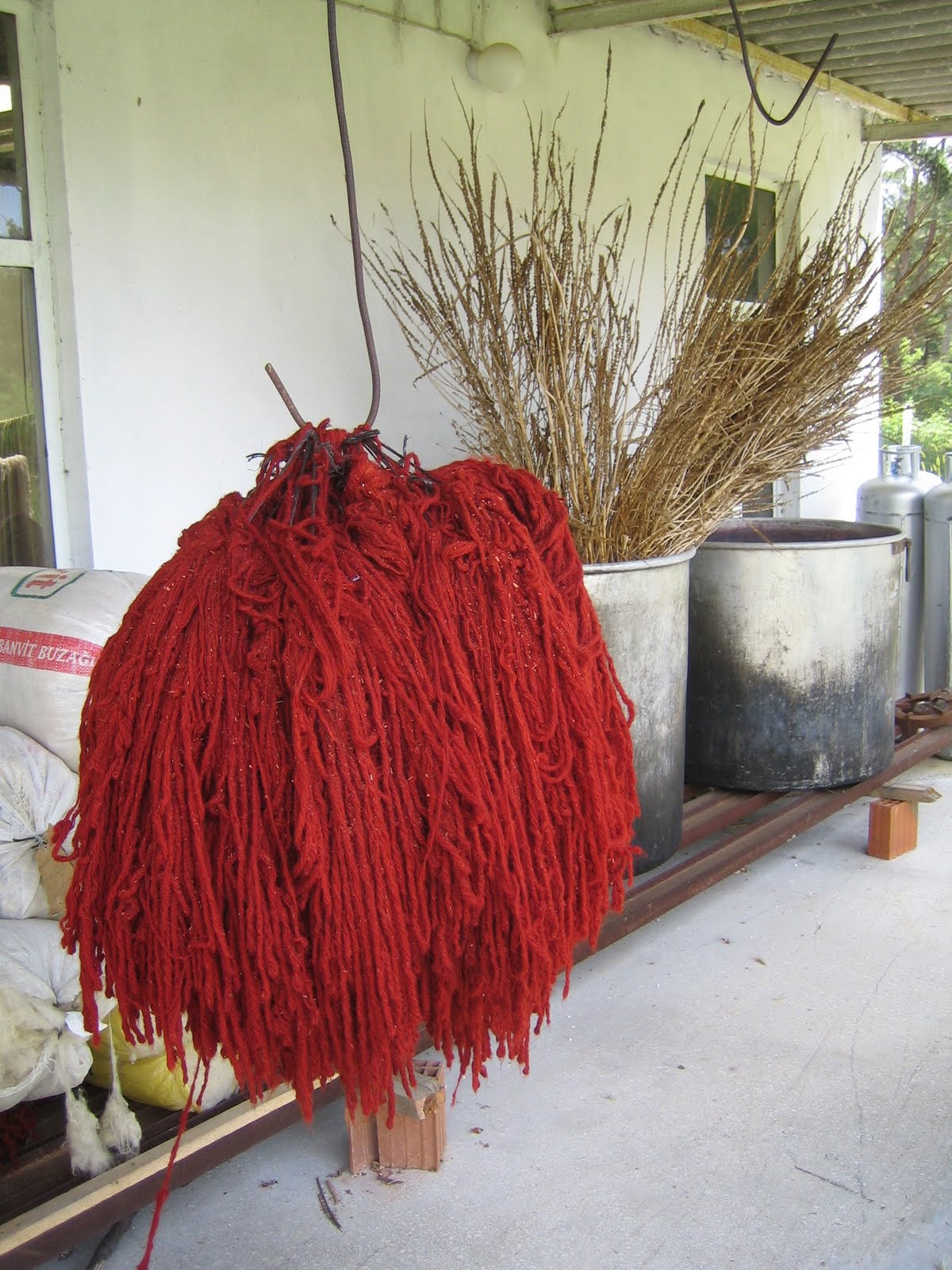 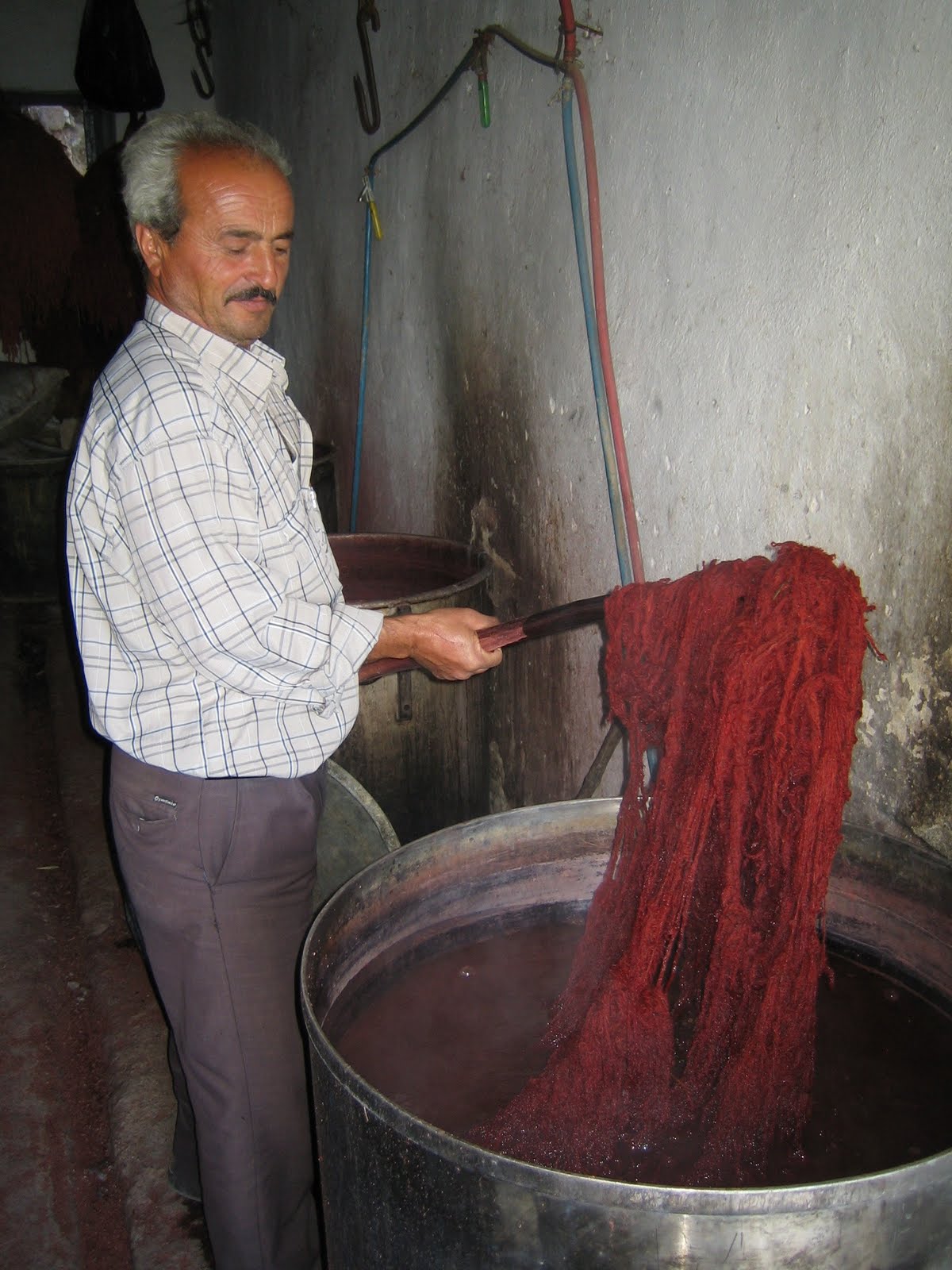 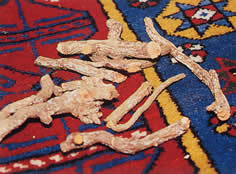 Another red tone very well appreciated in Anatolian Textiles is the cold red. This hue is very often used in the carpets and kilims of Eastern Turkey. Taking the roods from two local bugs, the Mediterranean Kermes and Ararat Cochineal which can dye to this clod hue of red, American cochineal was imported and sold to the local producers by Armenian tradesmen. 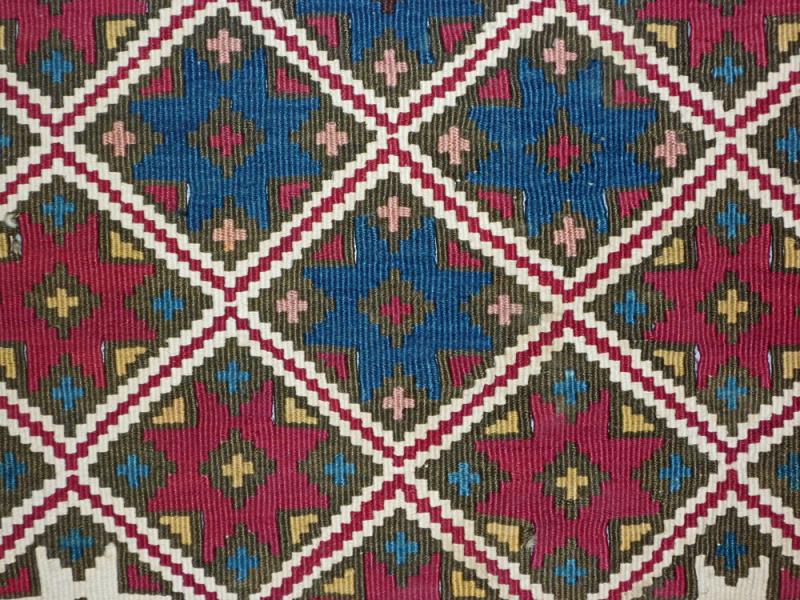 The blues were always been obtained from the indigotin molecule which is found mainly in two plants, a local one called woad and an exported one named indigo. The woad is weak in the content of the indigotin molecule but it has a lot of enzymes making the blue fermentation vat suitable for the fibers. On the other hand, woad contains a lot of yellow dyes itself so that the blues made with woad in early periods are always with a green hue. We can see those greenish blues in early Seljuk carpets. Indigo plant contains maybe thirty times more indigotin than the woad and it has not the excessive yellow dyes so the colors obtained with indigo are generally closer to real blue shades. For the indigo plant blue to be used, the dye masters of Anatolia had been obliged to wait until the importation of the indigo plant from India was possible after the silk road has been secured from the wars and banditry by the states and empires from which the road passes. So the indigo began to be regularly imported after the late 14th century in Anatolia. 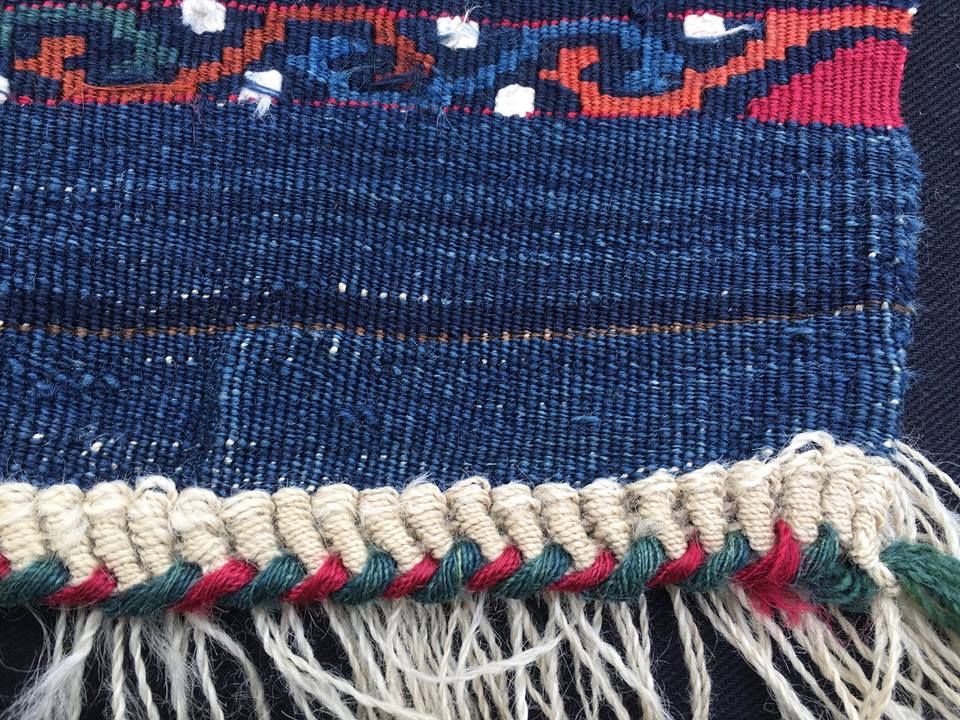 The yellow has many resources in Turkey s plants. The number of those plants is around eighty but most of them contain the dyes from the “flavone” family which tends to fade to brownish-yellow by the effect of the oxygen and light. Some of these plants were also cultivated and sold also to the European countries which was a very profitable operation. For example “cehri” is a local and endemic plant that is very much used in Turkey and has been exported abroad.

The light-fast and wash-fast plant of the Turkish carpet weaving industry is Reseda Luteola or Dyer’s Weld. It contains a dye called luteolin which is extremely resistant to the effect of light and wash over the dyed textiles and gives a vivid and pure yellow. Weld was also cultivated and specially used in the famous Ushak and Selendi rugs produced and sold to Western countries since the early 15th century. 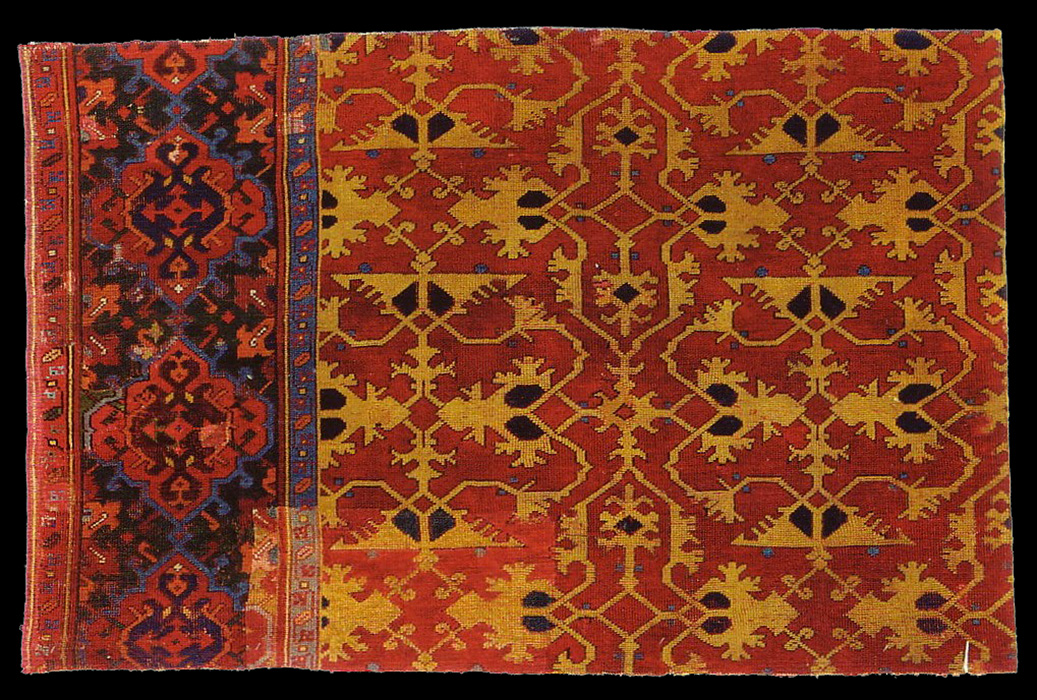 The secondary colors are always obtained with the combination of two major colors in a process of successive dye baths. So for the orange hues, the textiles were first dyed in red, and then to yellow for the greens, the textiles were first dyed in yellows, then blues; or vice versa. The main hint in these processes is not to take out the first dyes fixed on the textile during the preparation of the second dye to be held. But this method is not valid interestingly for the Purple color.

The purple color was always linked in antiquity with nobleness and power because it is extremely difficult to obtain purple which leads to the necessity of being wealthy to have it. The color was even attributed to the Emperor by Byzantines so it was banned to wear it because it would have the meaning of claiming for oneself to be the emperor to wear it. Generally obtained from a sea shell in antiquity, this color was spread more in the Mediterranean basin.

If one dyes red over blue or blue over red with the most spread dye materials for these colors, meaning the madder root and the indigo, he or she will obtain a saturated maroon color rather than purple due to the contradicting chemical infrastructure of the two dye materials with are not compatible with each other. Nevertheless one might see purple-dyed carpets or kilims more often than purple-dyed textiles in Ottoman or Byzantine palace because there is another way to obtain purple color yet quite expensive even though not as expensive as the seashell process.

The madder root is a total dye depot with its 19 distinct molecules as dye material. Two of them, Purpurine and Alizarine make beautiful purples with the iron mordant processed at the right temperature and pH. 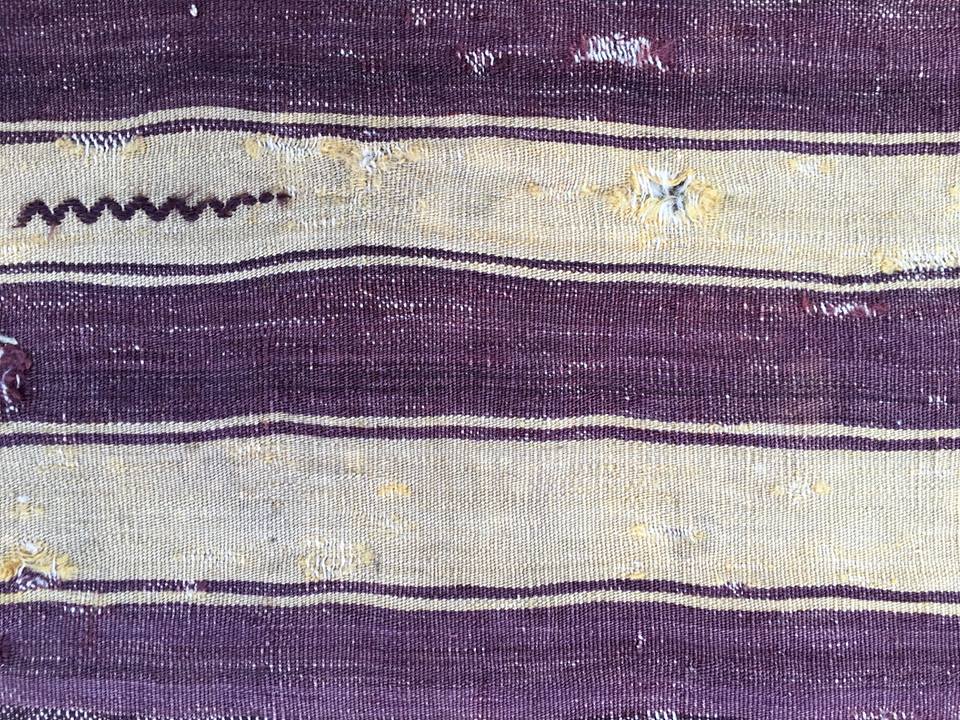 The black in the Turkish textiles is obtained with two methods. Either the textile fibers are mordanted with iron salts and then subjected to a vat with tannin, that may be obtained from different plants such as the acorn of the oak tree, sumac, pine cone, pomegranate skin, and madder root. Or the fibers are first dyed to very dark blue with indigo and madder root or another dark dye giving material is used to turn out this extremely dark blue to black. 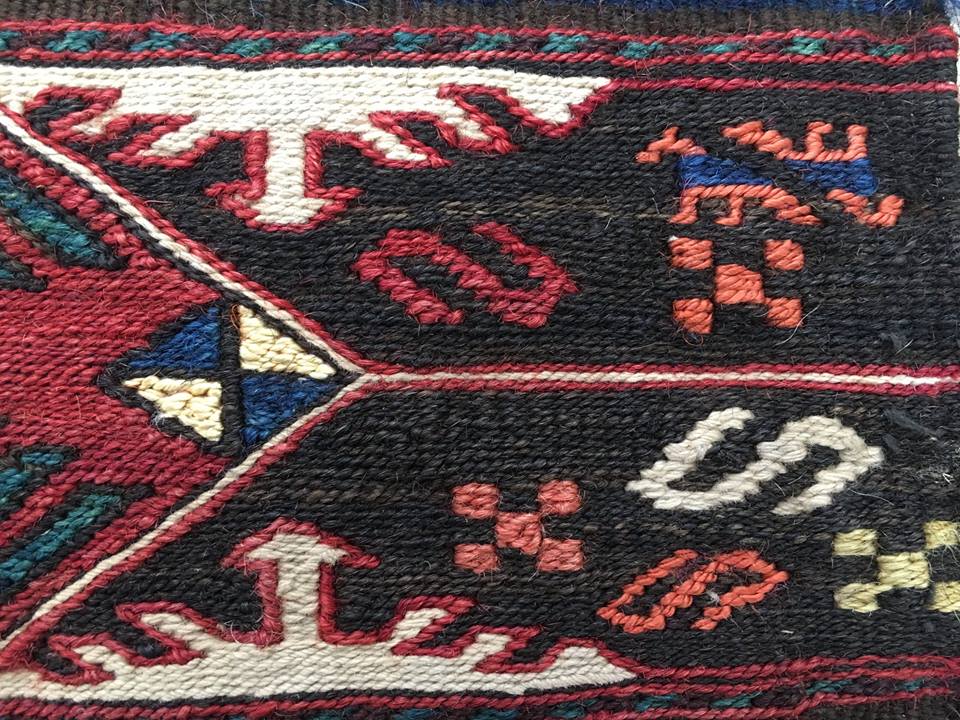 The brown and maroons are obtained either by the help of oak leaves and acorns or walnut skins or also by combining saturated madder root red with indigo blue dye. 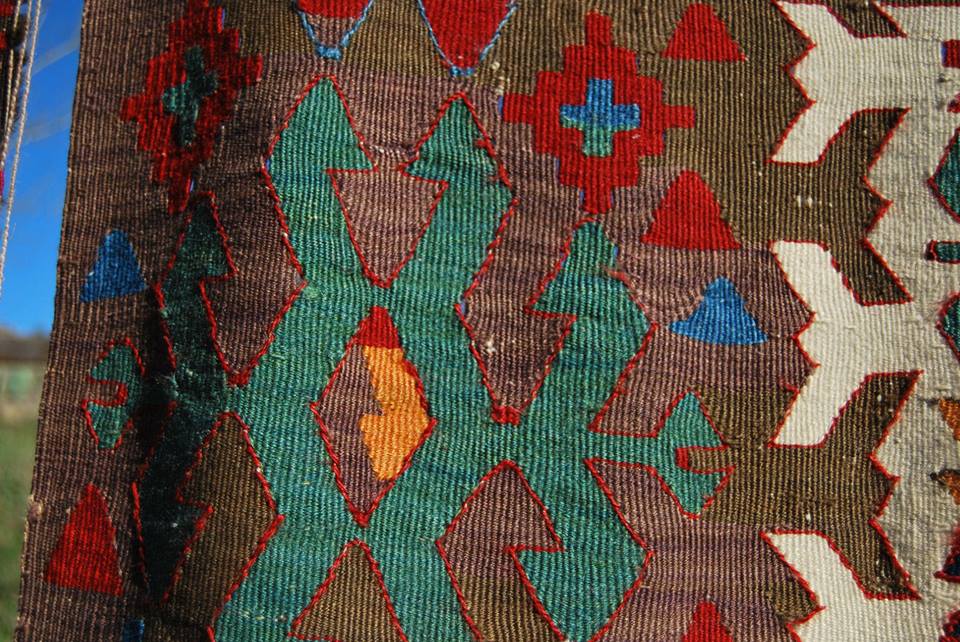 As one may see these formulas and recipes are based on experiences and trials of centuries and are bout to be lost forever by the effect of industrial synthetic dyes Nevertheless synthetic dyes have never been able to dye in the warm saturated and mellowed lovely shades of antique carpets despite the hight technology and practical properties they have.